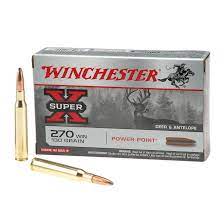 Manufactured by the legendary Winchester Ammunition Company, this product is brand new, brass-cased, boxer-primed, non-corrosive and reloadable. It is a staple hunting and target practice ammunition.

This line of Winchester hunting ammunition is one of the most common in use today, prized for its affordability, performance and history in the hands of the American hunter.

Winchester began offering its quality product in 1873 and has been providing the citizens and military of the United States with the same standard of quality ever since.

Winchester has brought the wild wild west into the 21st century with these .270 Win Ammo Super-X – 130gr rounds! These rounds are brass cased, boxer-primed, non-corrosive and reloadable. Super-X Power-Point ammunition has a unique exposed soft nose jacketed bullet engineered to deliver maximum energy. Winchester’s genius engineers manufactured these with notches around the jacket mouth to improve performance and guarantee uniform expansion for massive energy and damage.

Don’t be without these on your next big game hunting trip. These rounds are specifically designed for large game with thick hides such as Whitetail, Mule Deer, Antelope, Black Bear and Wild Boar. With a Muzzle Velocity of 3060 fps and Muzzle Energy of 2702 ft-lbs, these rounds will best any beast!

There are no reviews yet.

Be the first to review “winchester .270 ammo 500 rounds” Cancel reply